Sherman Art Conservation
CONSERVATION AND RESTORATION OF PAINTINGS AND MURALS 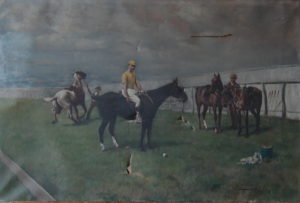 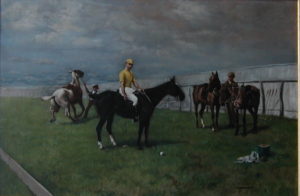 Before treatment the canvas was loose on the stretcher, had corner draws (the lines radiating from the lower left corner–see note 1 below), and had several small puncture holes and tears. The worse tear was the horizontal tear in the sky portion of the painting in which the tear had opened to nearly 1/4 inch and could not be rejoined. The painting was also covered by a thick grime layer. 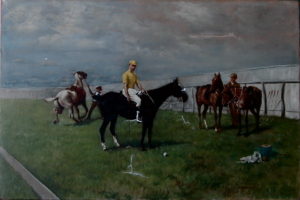 Note 1. Corner draws are caused by uneven tension caused by keying-out the stretcher. Keying out refers to hammering the wedges (keys) into the openings in the corners on the reverse of the stretcher. Stretchers are designed to be expanded by the use of keys (or other mechanical devices) which can place a loose canvas into tension. However, at times excessive keying usually coupled with an original uneven stretching of the canvas will result in corner draws. It should also be noted that keying-out an old brittle canvas will often result in tears along the tacking edges and should only be done with great care.

Note 2. Areas of missing canvas should always be filled with inserts of a similar canvas weave (this is why often a piece of the painting’s tacking edges will be utilized if possible). This is for two reasons: first, it allows for a better imitation of the painting surface which facilitates retouching and second, if a large area of canvas loss is filled with gesso, spackle or putty, it will tend to crack in the future.